Michael David Ward is a Japanese American technical illustrator/writer from the tech industry, a published fine-artist, graphic designer, and science fiction/fantasy writer. He has created many commemorative images for Paramount Studios, Lucas Arts, and New Line Cinema on such properties as Star Trek, Star Wars, and Lost in Space. His works of art and character designs have also been licensed by numerous companies for a variety of products. His work has also been featured in numerous magazines such as Heavy Metal Magazine as well as on book covers.

His original paintings and limited-edition prints are collected worldwide and have been prominently displayed in galleries and exhibitions all over the United States, Europe, and Japan. His art is in the collections of people such as Gene Roddenberry, George Lucas, Jeff Bezos, William Shatner, Leonard Nimoy, Nichelle Nichols, Jonathan Frakes, and numerous other actors and businesses.

Michael was chosen as a featured artist in a series of “Marine Art Expos” affiliated with the Cousteau Society and produced in Monterey, California and Maui, Hawaii.

Some of Michael’s images have been seen on television shows such as the Third Rock from the Sun, Star Trek 25th Anniversary Special, the Star Trek documentary Trekkies, and featured as a prominent display at Disneyland’s “Star Tours” ride.

In addition to his accomplishments as a fine artist, Michael founded a successful sportswear apparel company named “Lifeforms International” which featured numerous character designs created by Michael. The company went on to sell millions of t-shirts and other apparel nationally and worldwide to gift shops and department stores such Federated, J.C. Penny, Mervyns, Macy’s, etc.

Michael’s characters also attracted the attention of Hollywood such as 20th Century Fox and MGM Animation, and he’s worked as a designer on pre and post-production of several films. 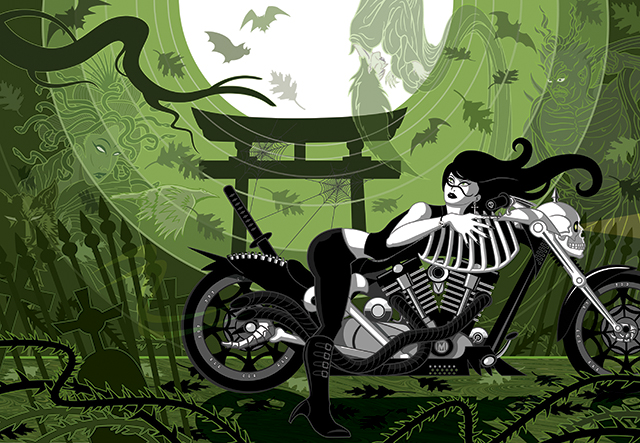