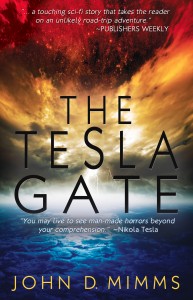 Thomas Pendleton loves his wife, Ann, and six-year-old son, Seth, more than anything, but his job often makes him an absent husband and father. One day, after Thomas leaves on a business trip, his wife and son are killed in a car accident. Thomas shuts himself off from the world and is at home grieving when a cosmic storm enters Earth’s atmosphere. Scientists are baffled by its composition and origins, but not nearly as much as they are by the storm’s side effect: Anyone who has died and chosen not to cross over is suddenly visible and can interact with the living. Ann does not return, but Seth does, and Thomas sees it as a miraculous second chance to spend time with his son and keep the promises he had previously broken. They set out on a trip to the Air and Space Museum in Washington, DC, but little do they know that they are traveling headlong into a social and political maelstrom that will test Thomas in ways he could never imagine. Along the way, they come face to face with armed kidnappers who want Seth for his supernatural abilities, meet up with a medium, the ghost of a slave boy, and encounter none other than Abraham Lincoln. Citing an overpopulation problem caused by the “Impalpables” the government begins to take drastic measures. Military scientists have a device called the Tesla Gate that is said to return “Impals” to where they were before the storm. Many have nicknamed the controversial machine “the shredder” because no one really knows if it will do what it is reputed to, or if it will instead shred the Impals-effectively destroying the soul. Thomas is determined to do everything possible to save Seth, or at the very least, ensure that Seth doesn’t have to endure his sentence alone . . .