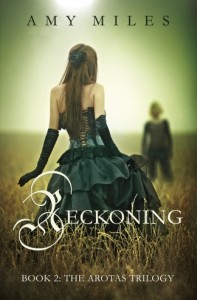 Roseline is left with questions that refuse answers and only the memory of a man she vows to hunt and kill, but to do so, she must call a truce with her sworn enemy.

Together, Roseline and Nicolae track Fane to the underbelly of London, in search of Gabrielbs kidnappers, but when Malachi- an Immortal with mystifying origin- presents himself as their guide, Roseline discovers she is not the only one looking for Gabriel.

Buried within the secret chambers of the infamous Hellfire Club, Roseline discovers a grim truth: Gabriel isnbt just a pawn being used by the Arotas prophecy, and those who seek to control its power. He is Arotas.

Everything Roseline has ever known about her brethren is about to change. Emotions flare, friendships sever and the newly formed bonds between enemies are tested as she delves into realms hardly conceived. They are trapped in the midst of a battle that has been waging since the beginning of time.

The prophecy binds them all together. But will they break before the end?